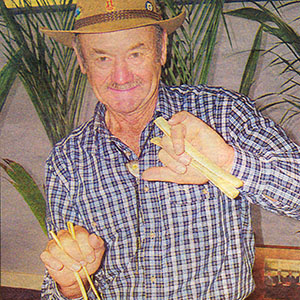 Being retired, I was planning to drive up north one cold winter to visit some lifelong friends. Consequently, I entered into this event as a bit of fun.

It was the first one of its type that the ‘Variety Club of Queensland’ had tried. The Club is involved throughout Australia, running all types of events, including car rallies, to raise funds for underprivileged children.

I arrived in time to enter into the fifth heat and was asked to return for the semi-final and for the Grand Final; these were about a fortnight apart.

The ‘World Title’ as far as I know is not connected to any other competition, but probably used to attract attention. A chap by the name of Tommy Campion was the organizer and very easy to get along with. I have tried but have not been able to contact him to see if he intends to run one this year.
The heats were attended by approximately 200 to 300 people and the Grand Final by maybe 500 odd.

It was truly a variety show held on Sunday afternoons. Variety was in the form of harmonica, spoons, birdcallers, yodeller, comb & tissue paper, penny whistle, kazoo, Jews-harp, tea-chest whistler (bass), musical saw, gum leaf player, lagerphone, and of course, bones players. All of this was interspersed with professional singers and performers from the ‘Gold Coast’ (a holiday retirees’ playground near Brisbane in Queensland.)
The Grand Final was a great event that had the right atmosphere right from the start, helped along by the compere and comedian Ken Bennett. Having such a variety of entrants, it was necessary to divide it into sections as you couldn’t compare a ‘birdcaller’ to a bones player.

There were three bones players in the Grand Final. One was a very good two-handed player and the other, Lem Bann, was single-handed.
The backing music was optional— either live or in most cases we used a track from a CD – one number only.
It took a while to hand out the various trophies to the place getters and toward the end I was overwhelmed to receive the ‘Bones Championship.’ As well as this; they had a trophy for ‘Most Outstanding Artist’ that really topped my day off. It was my first competition that I’ve been in and was thrilled to feel the lift in my personal profile both in Queensland and when arriving home.

They call me ‘Hillbilly Bones’ and this tradition was handed down by my dad. When I was a little tucker he was in Blackface Minstrel Shows–banjo, bones, mandolin, top hats and bow ties. At the age of ten when I picked them up, I just rattled them. Then I got a job and the music unfortunately just floated away. In recent years I picked the instruments back up and still use the bones that I got from my father.

I am very proud, underneath it all, to be continuing in my father’s footsteps on bones playing. I play what I think are whale bones (but they could be ivory) along with two bullock bones that replaced two of the bones that I lost years ago.
I am so pleased to find the Rhythm Bones Society and to be a member of our unique group. John Hill
(Note: check out these websites: John at www.abc.net.au/southeastsa/stories/s942940.htm and Lem Bann at www.abc.net.au/arts/adlib/stories/s916160.htm. John lives in Mt Gambier, South Australia, half-way between Adelaide and Melbourne. He also plays the squeeze box, harmonica and violin.