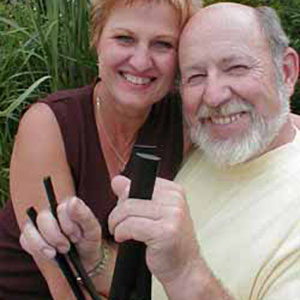 Bones Fest VII was hosted by us, Gil and Linda Hibben, in Louisville, KY, on July 25, 26, &, 27, 2003 at the Kentucky Theatre. This historic theatre was a great place to hold a bones fest with great acoustics, and side rooms for jamming and practicing. Bones players who were here a day early were featured on three separate TV shows, all very early morning news programs.

We also had a very good article in the Louisville Eccentric Observer  which caters to the arts community. The result of the combined publicity brought quite a few people to the Kentucky Theatre for the Saturday night performance. Friday night was a reception at the Theatre with heavy hors d’ouvres catered by Linda and her sister-in-law Sally Cochran.

Former member Dr. Sandra Graves provided her original paintings and flower arrangements to set the tone for a very welcoming reception area. There was plenty of jamming and with the stage this was one of the best jam scenes we have had. Steve Brown received the Meritorious Service award and then showed off his winning All-Ireland style. He is indeed a champion. Linda and Gil Hibben