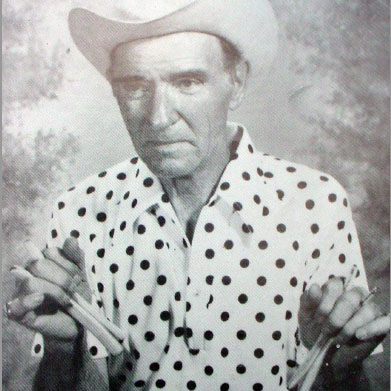 Cecil Hiatt and his family have been friends of my family since the late 1920’s. He was born in 1912 and raised near Braman, Oklahoma, where he worked on the ranch and dairy farm. Music was a pastime that everyone looked forward to, especially after a long day’s work, as a means of getting together with family and friends.

Cecil’s early influence was his father, a musician who played several instruments. Cecil bought and learned every Jimmy Rodgers tune that was released. I will always remember Cecil playing guitar and harp, singing and yodeling those Jimmy Rodger’s songs.

Cecil met my Dad, Lue Berline, around 1930. They lived only ten miles apart, but music is what eventually brought them together. Cecil was playing with a local band, the South Haven Ramblers, every Saturday night in the little farm town of South Haven, Kansas. The show was free and held outdoors on a little stage in the middle of town. Herb Bullene, a good fiddler from South Haven, was the band’s organizer and leader. He found out about my Dad and got him to join the group. They occasionally played a few other small towns nearby, staying together as a band for eleven years.

In 1928 the South Haven Ramblers were invited to play at the famous 101 Ranch annual shindig. The 101 Ranch was located near Ponca City, Oklahoma and employed 500 cowboys to work its 101 thousand acres. Every year they would have a big barbeque to honor the ranch and the people who worked there. One of the most famous and favorite of all cowboys was Frank “Pistol Pete” Eaton.

Talks About and Plays Oldtime Bones