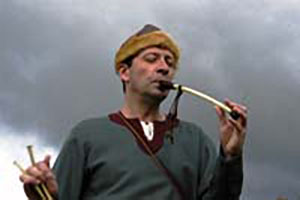 Poul Høxbro has both a classical diploma and soloist’s diploma from the Carl Nielsen Academy of Music, and a background in rock and folk music. His unique work on medieval pipe and tabor has brought him international acclaim, and resulted in multiple prizes, including the Danish Radio Symphony Orchestra’s prize of honour, the Emil Holms Scholarship.

His remarkable musicianship and his virtuosity on folk and classical pipes and historical percussion instruments, means that he is highly respected and sought after as a collaborator across multiple musical genres and in many countries. Poul Høxbro is well known for incorporating narration into his concerts and he has for many years performed with story telling in both Danish, English, German and Swedish. He can also be experienced as an instructor of dancing with medieval roots.

In 1999 he heard about a Swedish fresco from c. 1470 showing the tabor pipe played simultaneously with a pair of bones. Visiting Estuna church and photographing the detailed picture he knew he had to practice like mad to play also this combination of instruments. He got a pair of “birthday present bone bones ” bought by a good friend visiting Ireland, and now the sound of pipe-&-bones is heard in nearly all his concerts around the world. To see the frescos: http://www.poulhoxbro.dk/malerier.html.