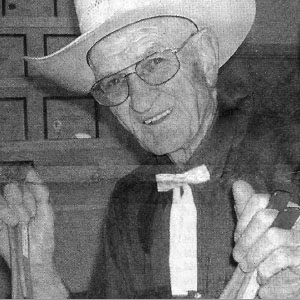 Carl Cromer (Red) Hedrick, 77, of Fincastle, VA passed away Friday August 19, 2005 at Lewis-Gale Hospital in Salem, Va. from a heart attack. Carl was a gentleman’s gentleman, a true renaissance man, story teller, humorist, and above all a Rhythm Bones Player. Carl was a Charter Member of the Rhythm Bones Society and attended Bone Fest I with his grandson Carl and several others after that.

According to his wife Virginia, “Carl never met a person he did not like” and everyone loved him. He loved sports literature and music. He could play any musical instrument he touched with his favorites being mandolin and the rhythm bones. He was recently featured on a CD of local artists rattling the bones.

Carl was a lifelong resident of Fincastle and active in many capacities.

He served as Town Councilman, Boy Scout leader, member of the Catawba Masonic Lodge, United Methodist Church, the Fincastle Ruritans, and Mayor of Fincastle. He was proclaimed an honorary Historic Landmark by his town of Fincastle in 2000.