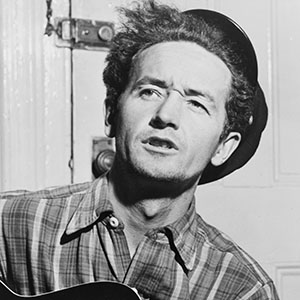 [Editor’s note: the following is a tran–scription of a telephone conversation.]“Woody Guthrie played rhythm bones with me on stage sometimes toward the end of his career during the years 1951 to 1953. I was performing with my guitar in Marin county, just north of San Francisco, and we were playing some of Woody’s favorite songs. One of them was one he sang and played on the mandolin – Whistlin’ Rufus [Jack sang it without words]. I was in my late teens at that time. Woody was slowing down as he was getting sick.“I don’t know if there are any tapes as he had a Webster/Chicago (Webco) tape recorder and recorded a lot of stuff when we played music together in the morning.

“I can’t remember what kind of bones he played, but he played two-handed. I never learned to play the bones. “There was a guy out here in California, Artis the Spoonman, who I remember fondly and he would sometimes walk up and play a song with me. That was probably 30 years ago.” Rambling Jack Elliott

The following is a letter from Steve Wixson to Pete Seeger, dated July 12, 2011, and Pete’s response.

The Carolina Chocolate Drops performed here in Chattanooga, and Dom Flemons stopped by to look at the information we have collected over the years about rhythm bones. He mentioned that when he met you, you told him that your grandfather Woody Guthrie play bones. I am the newsletter editor of our newsletter The Rhythm Bones Player think this should be documented for the future. Our little newsletter goes to members, but it is also cataloged by the Library of Congress. I would appreciate your help. Yours, Steve Wixson

Steve – I was only 10 years old when my mother’s father died and only saw him a few times- don’t make a big thing of it. And Woody only played ‘em occasionally.  Regrets – Pete Seeger, July 21, ‘11