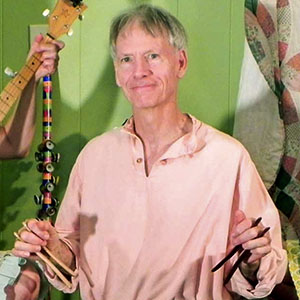 In the Ozark Mountains of northern Arkansas, traditional Old Time music and dance have always been easy to find. My own earliest dance memories are from my paternal granddad’s front room in the 1950’s, where square dances and polkas were danced with gusto. My memories of the square dances at my grandad’s house are shadowy, but more distinct are later reminiscences of aunts telling of how I was under foot all the time.

That part of the country felt that percussion had a place in any good time, and dancers “jigged” in time with the music as they moved through the figures of the square dance. I didn’t know it at the time, but what I was seeing and hearing was the local form of the traditional percussive dance they call “flatfooting” back East in the Appalachians. The percussion was not limited to the dancers, though, as a band would often have someone playing the “bones.”

Folk from “off,” which is anywhere that is not the Ozarks, call them rhythm bones, but around the mountains here, they are just bones. Up until the 1980’s, most folk had an elder family member, often “grandad,” who played. Nowadays, I suppose that would be a great grandparent. I think this is where my love of percussion started, sunk its roots in my brain, and has flourished ever since. As a child, playing the bones was beyond me, but there were other ways to keep the beat of the music. Probably around age 6, to my parents chagrin, I discovered the fascinating rhythm possibilities of whacking the furniture with sticks in time to polka music! Ah, the dubious pleasure and pride of having children interested in percussion. I enjoyed those dances and gatherings during my childhood, but somewhere in my later teens I discovered the wider world.