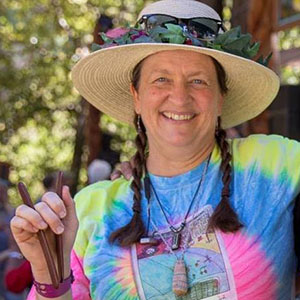 My husband, Randy and I were introduced to rhythm bones at the Renaissance Faire in 1982, where we got a pair of Percy Danforth rhythm bones, but not much instruction. After teaching ourselves to get a triplet, we were lucky to meet Percy himself, as my husband described in his bio.

Once we had the basics, I wanted a pair of my own, so I made one. When we took them to the Faire, I ended up teaching someone almost every weekend, and soon was selling the pairs I made.

The name “Shooting Star Bones” came from the way I signed my name at the time. My maiden name was Smith, and I wrote the M of Mardeen with 3 lines and the S of Smith as a star. Put the lines above the star, and you get the Shooting Star logo.

Lark in the Morning was the first catalog to carry my rhythm bones, and Capritaurus Music sold them at their booth at Faire. Eventually, we created our own booth, “Bonecastle”, partnering with a friend selling her ceramic castles, and teaching hundreds of people to play.

Several other music stores have carried my rhythm bones over the years, and we did a couple of road trips on the west coast, doing workshops at music stores along the way. We also sold them at the Strawberry Music Festival in the Lark in the Morning booth for several years.

That is where I met an Irish rhythm bones player who showed me a different way of holding them that enables changing tone while playing. That has become my preferred way to play.

Letter to the Editor – 2017.  Bones Fest XXI was everything we hoped it would be, though we  didn’t really know what to expect. We had heard in advance that the registration numbers were low, and at first we were a little bit disappointed that only twelve RBS members showed up. But we immediately felt so welcome and comfortable with everyone that it seemed almost like a reunion of a family we didn’t know we had. It was an intimate gathering of like minded people sharing their love of rhythm bones, with each other and with the dozen or so lucky people who  happened upon one of our performances. I really enjoyed seeing the many different styles of very talented bonists, and everyone’s collections of bones made of all sorts of materials. Even better,  we got to try playing all of them, and everyone shared their techniques and tips freely. Jamming  with a bunch of rhythm bones players can be a cacophony of clacking, but when everyone has  such mastery of dynamics and rhythm, whether we let each other take a solo or played all  together, the rhythms flowed and blended with complexity that allowed us all to hear each other’s unique style. It was truly the most fun we have ever had playing rhythm bones. I think we are 2 hooked. Mardeen Gordon