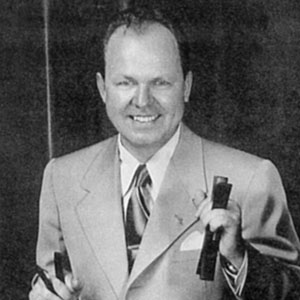 Ted Goon, Mr. Goon Bones, was a recording artist during the late 1940’s. He had many hits and rose to seventh on the Jukebox popular music charts. There were thirty or so Mr. Goon Bones clubs where people who owned authentic Goon-Bones gathered to exchange ideas and practice their bones playing.

I found Ted while surfing the internet. I telephoned him and after preliminary conversations recorded a two hour telephone interview. I was exhausted after the interview, and I wonder how Ted at age 88 felt. He sounded exhilarated, and played bones to illustrate his ideas.

Ted Goon was born in 1911 and at age twelve heard bones played at a tent minstrel show. He says “it was the most beautiful and sensational sound I’d ever heard.”. He queried his father only to discover his father knew about bones. He carved Ted a set and showed him the basics. Ted made better bones and developed enough ability by his senior year to play in the high school jazz band.
Ted went to college with the goal of getting into business. His hobby became golf, not bones playing. World War II comes along and Ted’s right leg gets banged up forcing him into a long period of hospital rehabilitation. He knew his golf days were over, and needing a hobby he sent for his musical bones.

By this time bones had died out, and new music had come along. He needed a starting point to continue playing the bones, but for a time couldn’t find one. But he lucked out at an old library where he found a definition of rhythm that was what he was looking for. Rhythm: a pattern of beats or accents repeated uniformly.

A Letter to Editor from Ted Goon – I have received the Vol 3, No 1 newsletter and ….wow!. (Editor’s note: The newsletter announced Ted as our first Honorary Member.) At age 89 3/4, I no longer have the concentration to write the depth of my feelings, but I can say that I can’t remember when I’ve experienced such satisfaction and pleasure. I feel certain that you all are on your way to making musical history, and I am flattered to be considered part of it. I feel certain that you will be able to come up with a musical application of the bones that will be far broader than I was able to do in the relatively short time that I researched and worked with them. My best personal regards to all who are carrying the load. Ted Goon

The Sheik of Araby