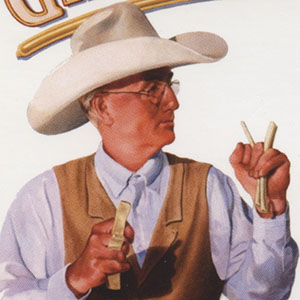 A more complete obituary can be found on their website, campstreetcafe.com. Guy’s most recent contribution titled ‘Cowboy Bones’ is on Page 6. There will be a short tribute video on our homepage in October. Steve Wixson

Letter to the Editor – 2013. Thank you for the video tribute to Guy! When Guy gave me the  instructional video by Mel Mercier on playing the bodhran, he never would have guessed what he was getting himself in to. The segment in the video on playing rhythm bones sparked Guy’s interest. He went out where an old grey Brahman cow had died and found his first set of bones. That first  set, strangely enough, ended up being the set he played from then on.

Playing the bones was I feel for Guy a very liberating experience. He was able to jam with musicians from a variety of generes of music and always made it work. After every performance, Guy would be surrounded by a group of inquiring  people-both young and old-wanting to learn to play rhythm bones. He would always give an impromptu rhythm bones workshop.

Thank you for the video, thank you for all you’ve done, and my wife and I hope to make it to one of your events soon. With Highest Regards, Pipp Gillette