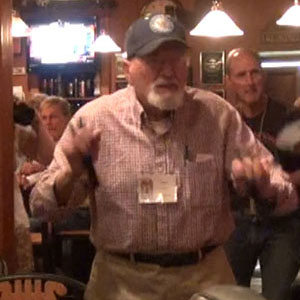 I got selected when I auditioned here in Minneapolis. They announced it in the paper, and I said why not – let’s do it. I’m 80 years old now. I’m trying to remember where we auditioned – some theater.

I was surprised to get a call saying “you’re on the show.” I was playing bones and my devil’s fiddle – sort of a one man band. It’s funny and a lot of people just laugh at it. I figure they are enjoying it and I’ve done it a lot of shows, particularly solo shows. When I play in a band they let me do at least one number with the devil’s fiddle and maybe a couple with the bones.

The show was in Chicago in a special theatre. I was so proud to be on the Ted Mack show. They paid for us to come, but we drove – they paid for gas.
When we were practicing – each one taking our turn – I think I got the most applause of anybody. They had a band. They gave each one of us 4 minutes, and for me I could play the bones for 2 minutes and the devils’ fiddle for the other two minutes.

I saw Ted Mack for the first time on the show. I don’t think I saw him before the show – might have. Ted was very gracious, and they treated us real well. They took care of our housing, our meals – everything.

The winner was selected with maybe 2 points by applause and the rest by people calling in or sending post cards.
I had to laugh like crazy because there were so many funny things that happened. You know when you’re practicing and playing things fall apart. The devil’s fiddle came apart and I had to repair it.

My bones were steady, and they were sort of new too. I made them when I was about 15 years old – out of ebony wood. I’m still playing them, and can’t wear them out. I’ve made other bones, but didn’t like the sound and threw them out.
I did not win – a singer won. Jack Frost