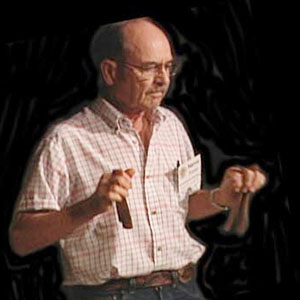 Norris Frazier, 80, a longtime Kamiah, Idaho resident, passed away on Sunday, Dec. 23, 2007.  Norris was well known in the region as a talented musician, playing his banjo and rhythm bones to the delight of many audiences. He shared this talent by teaching rhythm bones classes to adults and children. He was also a talented woodworker and made sets of bones and many other creations for his family and area residents. His talent as a rhythm bones player is perhaps best summed up with this quote from his niece, Deanna‘s eulogy:

I loved the way he played music. What most set him apart as a musician was what he could do with a pair of rattle bones—nothing more than carved hardwood – often carved by Uncle Norris. At first glance, they would appear to be the last instrument a person would select for the purpose of making music. But in the talented hands of Uncle Norris, the result was an incredible and intricate rhythm of clackity clack in time to a song or even by itself that was amazing enough to stop you in your tracks.   There’s a clip of him in his Tribute Video doing the drum part for the song “Wipe Out” on his rhythm bones that will show you how good he really was.

Norris and his wife attended Bones Fest VII, and were quite surprised with 10 members of the family showed up.  The Frazier family probably didn’t know what they were getting into, but they left the Fest feeling  a lot more comfortable. We felt like we had new friends in our family and hopefully they felt the same way we did. What they did was surprise father Norris by coming to the Bones Fest VII without him knowing about it. They did a great job playing bones on stage and hopefully we will se a lot more of them in the future.