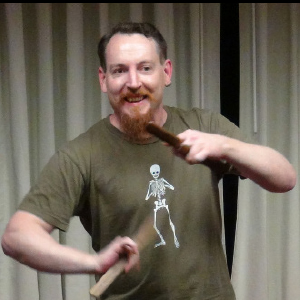 I grew up in Baltimore, Maryland. My first real instrument was the trombone which I played in 4th and 5th grade. I typically walked home from school and I remember that trombone case being about the same size as I was. This might have put into my mind an early notion to find something more portable.

Like a lot of kids, I took piano lessons after that. My father, Charles Robert Flynn, was a musician as well. My parents didn’t want me to be a junior, so they named me Charles Skeffington Flynn, and they called me Skeff from the very beginning. To this day, when someone calls me Charles, I know they are reading my name off of a form. Most of the time that means that they want money, so I’m in the habit of saying “No, he’s not home right now, can I take a message?” As for the piano lessons, they didn’t quite inspire me, but they did help me along my musical journey.

At the age of 15 I decided I wanted to learn how to play the bass guitar. All the credit goes to my mother for supporting me. We went to Bill’s Music in Baltimore and found a suitable instrument, one that I still have and play to this day. (https://www.facebook.com/VforVelcrOhm – some tracks even feature bones!) I remember that I didn’t like the color, or that I wanted a different instrument, but it turns out that Mom had it right.