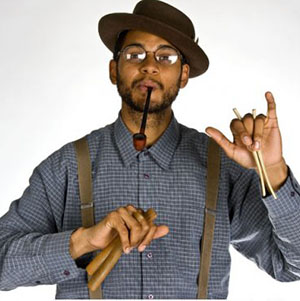 I first learned to play the bones from a woman that I met at the Mount Airy Fiddler’s Convention in Mount Airy, NC in the summer of 2006. The group I play with, the Carolina Chocolate Drops, had had our first CD release party during the festival. We had finished selling CDs to the crowd when this woman approached me.

She asked me if I played the bones. I told her “no”.  She then responded by telling me that I needed to learn the instrument because it was part of the tradition. She placed the bones in my hand and showed me how to do it. She then told me that the bones were her family’s instrument and told me a wonderful story of owning her uncle’s bones which he had kept with him all the way through Europe in WWII. The bones, she said, were light as a feather when she got them and they still had the imprint of his hand on the smooth surface.

After a few months, I went to teach at Common Ground on the Hill in Maryland which is where I met Washington, DC bones player, Mike Baytop.  Mike learned from an older man named Richard ‘Mr. Bones’ Thomas (I’ve heard his name pop up time and time again) and what Mike showed me was that the bones can work with any type of music.

The third element of my playing developed when I began to reexamine the older minstrel band picture. The bones players in most pictures are depicted with their hands up in the air. I then began to try and interpret movements I saw in the pictures and found that not only did it work, but it took the experience of playing the bones to a whole other level.
With these lessons I had learned the basic skills that I use now in my playing. I have also found that the bones have single-handed changed the way that I approach any other instrument that I play.

Jammin On The Bones with Jerron Paxton

At the Rock an Roll Hall of Fame

How to Play Rhythm Bones

Going Down The Road Feeling Bad