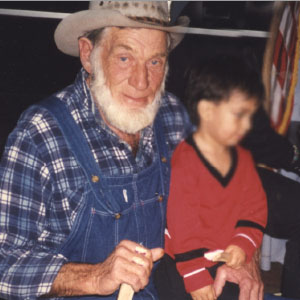 Bones Fiedler was Harper, Texas’ unofficial Ambassador, and usually had over a dozen visitors a day; some were local friends, but many were out-of-towners stopping at the Chamber of Commerce office to get information. Inside his house were two walls full of pictures of visitors who had taken his picture and sent it back to him. In a telephone interview, I asked him for his home address. He said, “Bones, Harper, Texas. Somehow it gets to me even without a zip code.”

Richard ‘Bones’ Fiedler served in the Army during World War II. Upon his return, he began working in the zoo in Washington, DC, and had many interesting experiences there. He helped raise the original “Smokey the Bear” who had been rescued from a forest fire in New Mexico and had burnt paws. He met Hopalong Cassidy, and he rescued a 1918 Stearns Motorcycle from the trash, and after restoring and then riding it for a few years, donated it to the Smithsonian Motorcycle Exhibit.

He moved to Texas to raise his children. He had two children, seven grandchildren and eight great grand- children. He had a dairy farm. He later traded that for a mercantile store that sold hardware, feed and clothes, and where he learned to make cowhide chairs. For several years, he exhibited them in the Texas Folklife Festival in San Antonio, the location of Bones Fest XV.

When the local newspaper got started, Bones took off his wonderful hat, pulled out $200.00 and said, “Here’s your start-up money.” He was the first donor, and became a member of its advisory board. He would often shelter a person or two down on their luck at his small home.