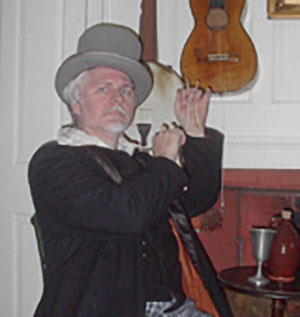 In the 1970’s John’s band-mate, banjoist Bill Kavanek invited him to attend a Civil War Reenactment on the condition that he bring along a guitar. After several years of campfire picking with the 22nd Virginia Volunteers they noted that the music did not meet the same authenticity standards as was set by the military activities. Over time John and Bill transformed from infantrymen into the recreated “Virginia Serenaders,” based on the “Ethiopian Serenaders,” an actual popular ensemble of the 1840’s. John “Professor Ole Bull” and “Old Cornmeal” Kavanek were joined by “Signiori Boni” (Bob Cassidy) and “Paganiger” (Keith Walters). To insure authenticity John researched and constructed reproduction banjos, tambourines, bones and also he restored antique parlor guitars. John occasionally performed with The Second South Carolina String Band and can be heard on their latest CD release “In High Cotton.”

A Few of John’s Songs