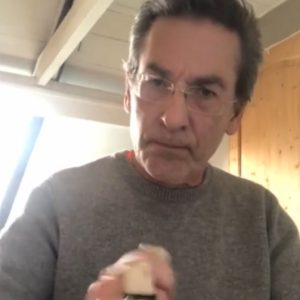 My name is Nicolas Dupin, I’m a Frenchman, born in 1961, near Paris, where I was raised and did my studies (in English and American language and litterature). I have been living in Brittany for a long while now.

In 2001, I went to Ireland for the first time. A few years before that, wishing to take up music again, I had started studying bodhran, rhythm bones and spoons on my own, thanks to various VHS videos (like Mel Mercier’s and Tommy Hayes,’ among others). I had been introduced to Irish music by a French friend of mind, who was married to an Irish dancer, and who played the fiddle. I ended up joining his traditional Irish music band playing bodhran. I first went to Ireland bcause I wanted to improve my bodhran playing.

In 2001, I went to Inisheer, where a bodhran summer school had just started, mostly to improve my bodhran playing, but as it happened, some of the Irish tutors on the island, who were there to teach bodhran, were also legendary bones players, like Mel Mercier, Tommy Hayes and Johnny McDonagh. That’s where I began to realize that there was much more to bodhran and rhythm bones playing than what I had thought before.