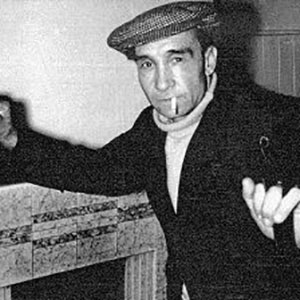 This photograph, taken during the late 1950s or early 1960s at the Bold Forester at Marchwood, is of the late and gifted New Forest bones player and step-dancer Ted ‘Darkie’ Duckett, who lived for a large part of his life a mile or so away at Hanger Corner on the Beaulieu Road. Although well known locally, he came as a young man from Wootton Bassett, Wiltshire, and married the daughter of Bert Doe, who had served in the cavalry compound at Denney Lodge before the widespread rehousing of all New Forest Gypsies in the new housing estates built at Hythe, Thorney Hill and Totton after the Second World War.

His lifelong ambition to perform on a London stage was not fulfilled until late in life, when he represented the Hampshire tradition at an annual National Gathering of the English Folk Song and Dance Society at their London headquarters. Prior to this he had appeared on BBC South television and at festivals and concerts, including Bournemouth Winter Gardens and Southampton Nuffield theatres, where – as always – he stole the show. He was also featured on the Forest Tracks record First Tracks, and in a BBC documentary on the Christchurch Folk Festival, where his great skill as a bones player is preserved.

Ted had been a Mummer in his youth, playing the role of Happy Jack, and as a dancer and bones player had often taken part in competitions, and ‘never been beat’. He died after his wife at Netley View, Hythe, and is succeeded by his daughters.