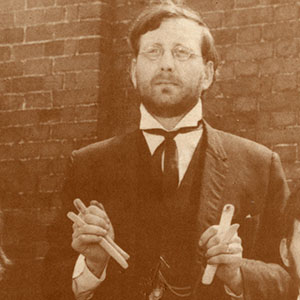 Nicholas Driver comes from three generations of rhythm bones players. He was born in London in 1946. He was taught by his father, Aubrey Driver, from the age of about eight years old, and Aubrey passed on many of his decorations and techniques. Aubrey Driver, born in 1907, represents a direct link with the period when bones playing was at its peak in Britain. It could be seen among the Irish community, in the hands of the East End of London Buskers, and on the stages of Music Halls in Britain brought by minstrel bands from the States. Even children played them in the streets in England using ‘roofing slate’ bones, and in this atmosphere the art was developed by many performers.

As to if his great-grandfather played the bones there is some doubt but according to his father it is likely. What is certain is that his grandfather was a serious player and indeed married into an Irish family. Nick’s grandmother came from County Mayo. His grandfather died young before Nick was born.

Certainly his grandfather and father made both bodhrans and bones. Recently an old lady sent Nick a set that his father had made for her long ago. However there was no serious production of either instrument until Nick, in his early thirties, decided to promote both to a wider audience.

Letter to the Editor – 2001. Just a note to say how sad I am about the tragedy that has struck your country, all the more strong to me as my wife was at the World Trade Centre when it happened and just escaped with  her life. She is physically ok but saw and experienced many dreadful things. We are behind the US here in the UK. I would like to thank all the folks I met at Bones Fest V for the deeply friendly welcome I received and the valued new friendships I made. It was so good to see and hear such talent in an ancient art. I looks forward very much to the time I can make it to another gathering. Take care and best wishes. Nick Driver