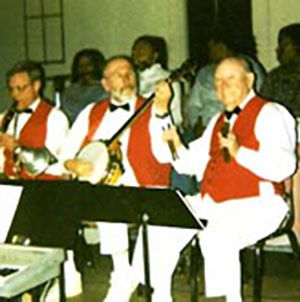 I am Edgar E. DeLong, Lieutenant Commander, U.S. Navy Retired. I learned to play the bones at age 10 from my grandfather who was a minstrel performer and circus clown. Over the years I kept active at it as a hobby. Since retirement from the Navy in 1969, I became an active participant in the Lions Clubs International’s music scholarship program in Virginia honoring black music composer, James Bland, who wrote “Carry Me Back to Ole Virginny”, “Oh Dem Golden Slippers”, and many other songs (about 700). I got interested in him and wrote a musical show titled Golden Slippers which required use of the bones and costumes of the Philadelphia Mummers dancing to that tune. It was produced by University of Maryland Eastern Shore in Princess Anne, MD, in April, 2006.