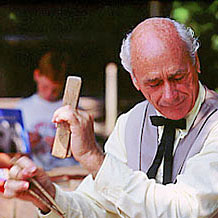 At the age of 17, my mother asked me, I don’t know why, to play like her grandpa whom I never saw him play.   I said, “Bones, what’s that?” She kinda held her hands up and showed me how he did it with his hands.

At Le Mars, Donny met Buddy Boswell, from Edgerton, Missouri, who came to the Le Mars festival to perform with the ”Union Mill ‘Opry.” Buddy asked me if I would like to come down and play on his show. So I went down there 2 or 3 times and played on his show.” While I was there, a gal that played on the stage talked to me and told me…”you ought to be in Silver Dollar City.” I responded, “What’s that? I didn’t even know what it was.” The lady told Donny she would get him some tickets, and he could play on stage with her group, “Green Side Up.”

At BFXI with Ernie and Sky