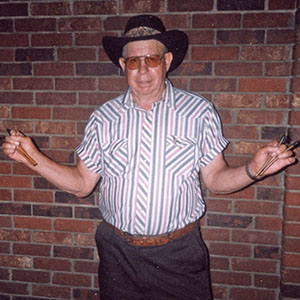 We are sad to announce that member John Davis passed away in 2014. John joined RBS in 2000 and he and his wife, Sarah, attended several Bones Fests. He started playing in 1944 when he was 15 years old. He learned from a friend of the family, the late George Brooks. He bought bones from Dr. Fred Edmonds and they were made from persimmon wood.  John had been playing one-handed bones for 66 years,.  After joining the Rhythm Bones Society, he began to play with both hands.  He recruited the late Will Kear into RBS.