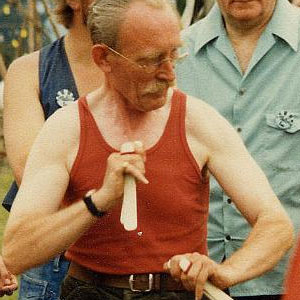 Len Davies,”The Bonesman” from England passed away in July in his late 70’s. Len played the bones since he was 5. A retired plastic engineer, he played across Europe, North Africa, and America. He made his own laminated plastic bones which had an excellent sound. He appeared on the English version of the TV show, ‘Whats My Line’. He played on recordings by The Trunkles, Michael Roach, and Geraint Watkins.

Len Davies daughter, Louisa, wrote about her dad for the Rhythm Bones Player in 2002.

“Dad did make “learner bones” and for a while these were supplied through two British traditional musical instrument retailers – Dave Mallinson Music (now called The Music Room) and Hobgoblin. I’ve got a double set of the child size bones and pair of adult bones in my collection but as far as I’m aware all other pairs have been sold.

“Dad appeared on a number of records. One or two by Sadie Green Sales Ragtime Jugband, one by Italian band Tre Martelli,…one by Alias Ron Kavana (although this isn’t very good, the rhythm bones are too quiet). My favourites are the live recordings though – I’ve got one of him playing with legendary Fairport Convention fiddler Dave Swarbrick and also the recording he made with Al Svendrowski, a harmonica player, in the Idlewood Inn in Pennsylvania (also on video)…I’ve also got a couple of radio interviews/sessions taped. Dad also appeared on What’s My Line? (a quiz show) and a local news programme.”

(Louisa is a fiddler and rhythm bones player for the Oddsodds, an English Irish band.)

Letter to the Editor: Reference: Obituary for Len Davies, the Bones Man, in Rhythm Bones Player, Vol 2, No. 4.  Len was a member of my band, TRUNKLES, from early in 1983, for about 1 year. I first saw Len playing at a Festival in the West Country and was impressed by his visual/physical impact and energy and realized the potential of him performing on stage, adding an extra dimension to the percussion side of the band. His ‘Electric Bones’ idea was that he had small pick-up style microphones on his wrists which linked back through the sound system to a strobe light machine, giving him a slo-mo action on stage, while the rest of the band were hit by static lights with colour changes, giving an incredible overall visual impact. Len was a bit of a drifter who traveled around in a small  live-in van. He was a great handy-man and a help to me between gigs, and we worked on restoring a wooden yacht I owned at that time. Regards, John Goodluck