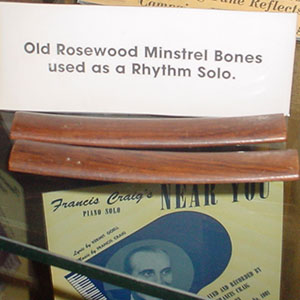 The reference to Francis Craig in the Templeton article got me thinking again about him. Francis Craig was band leader in Nashville, TN and another person who made rhythm bones records.

The following was extracted from a recording in the Special Collections Section of Vanderbilt’s Heard Library. The interviewer was Jo Sherman of radio station WSM, and the recording date was March 20, 1962.

“Most people look a me as a band leader or orchestra leader, but this time Red Foley asked me to make a record and join in with him playing the bones. I play the bones like in the old minstrel shows. “It turned out terrifically I must say, and I can brag on playing the bones anyway. It was Red Foley’s second biggest record.”  In response to a question from the interviewer, “I don’t know how many it sold, but he conceded that it was the second biggest hit he ever made in the recording business.”

The interviewer asked if he made any more bones records. “Yes, we did make a few more, but that was the biggest hit.”

The record he was talking about was Alabama Jubilee. The only other rhythm bones record found was titled Play Them Bones. Click the media links above to hear both. hear both of these records on our website.

As a child, Craig taught himself to play rhythm bones using the remains of a beef roast.