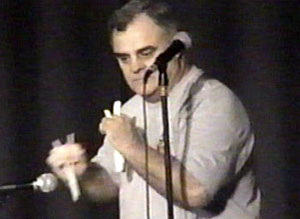 Tom Coyle is the 100th member of the Rhythm Bones Society. This growth was accomplished in just over one year, and one-third of the bones players on our mailing list have joined.

Tom was exposed to the bones by his musical family, but only recently got a Percy Danforth tape which has rekindled his interest. He plays two-handed, and likes traditional Celtic and American music and rock and roll. He says he is a beginner, but has already done some performing. He found out about the Society while “rooting through bodhran sites on the internet.” Welcome Tom, and we hope to meet you at Bones Fest V.

I was born in Philly, and lived most all my life here. I’ve always been an appreciator of music. My grandfather (John J. Maguire, Sr.) called music the number one art. His nickname was “Fiddler Maguire” even though he played every instrument but the fiddle.

Back in 1969 I was in The United States Marine Corps where I was exposed to lots of different types of music. I lived in Florida for a couple years back in the early 80’s and developed an appreciation for country music. As a child, I took clarinet lessons for a short while, but I gave it up because I realized I was a musically challenged student (of course this broke my grandfathers heart). I’ve always liked folk music. In my adolescent years I taught myself to make some noise with harmonicas (Bob Dylan fan). I played badly enough to drive away my friends and loved ones and I was proud. More recently, I rather miraculously, got a job with the Philadelphia Fire Dept. where there’s a band, the Philadelphia Police and Fire Pipes and Drums. They allow me to march around with them and beat upon the bass drum. I’ve learned a lot since becoming a member of this much esteemed organization (boom! boom! boom!). As a result, my interest in music has unmercifully risen again like “Ye Damned Whale” of Moby Dick fame. So much to the dismay of those closest to me, I have developed a middle aged interest in Celtic music, and if lack of talent dictates and I never become the musician my grandfather would have been proud of, well I’ll just click them spoons, I’ll just clack them bones, I’ll beat that bodhran, I’ll boom boom on that base drum, and nobody has to listen. YEAH! RIGHT! God bless all you music lovers. Tom Coyle