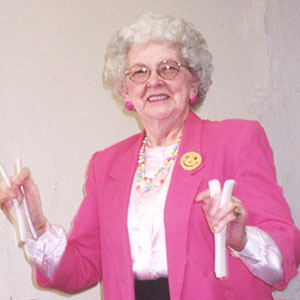 Vivian Cox played the bones for more than 70 years. Real bones. Rib bones. Bones from a cow. Music. By her own account, she wass a “bones virtuoso,” and entertains several times a week at the Boggstown Inn and Cabaret.

Cox, who lived in rural Shelbyville, claimed she’s the only professional female rhythm bones player in the world. She’d never heard of another—and she would know. Over the years, she has attended “rhythm bones” conventions in California, Florida, Tennessee, Virginia and other locations. No one has ever refuted that claim.

Most weekends, Cox played at the luncheon at the Boggstown Inn. Russell Moss, co-owner of the cabaret, was very proud of his senior performer. “Vivian was classy, unique and very professional,” said Moss. “She was definitely a novelty, she loved people and was an inspiration to our senior patrons.”

Over the years, Cox has took her “rhythm bones show” on the road and met many celebrity music artists and entertainers. In 1996 she performed at the Thunderbird Theater in Branson, Mo.

Edward Cox was supportive of his wife but somewhat bemused by her notoriety. “I knew she could play rhythm bones when I married her, but I never gave it a second thought till I found out how much people liked it,” he said. “She was very outgoing and loved to entertain. I supposes she’d be rattling those bones till either she couldn’t drive over there anymore or her arms wore out.”

Letter to the Editor – 2004. Vivian was the first woman I ever saw play the bones. The fact that  she was a woman was quite beside the point, though. She was a terrific player. And more. She was an  entertainer in the best sense of the word. When I saw her last year at Bones Fest, her charm lit up the stage. She made me smile. And afterward, in person and later by email, she was just as lively, energetic and good natured. I consider myself lucky to have known her, even so briefly and slightly. She was inspiring and I’ll remember her fondly. Sandor Slomovits

There are several more remembrances in RBP, Vol 6, No 4