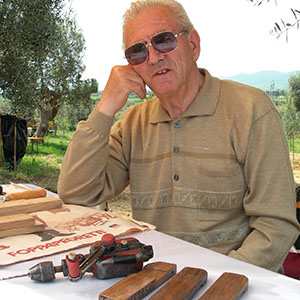 Ido Corti had played the Tuscan Castanets [what we call rhythm bones] since he was a boy, but it was only later in life that he started to construct this percussion instrument. He worked on its traditional structure innovatively and he experimented with many different types of wood. In an interview he said, “I start working on two slender, roughly outlined pieces of wood. Obviously, the wood must be well seasoned.”

He modified the structure of castanets by changing their thickness and width, and by making the surface concave to allow the nuckle to rest in it. In addition, he tied them together by using a small cord attached to the upper end, “They would always slip out of my hands, so I suddenly thought that I could keep them together by tying them up.” Corti labelled each pair of castanets that he constructed with the construction date, the type of wood and his own initials, I. C.

During his final years, he also experimented with the use of three castanets, which he played at the same time, alternating between two and three in some musical passages to highlight the intensity of rhythm. “When they are ready, before finishing them off and before making the hole for the cord, I test and weigh them to see if one of the two is heavier. For instance, I have noticed that the heavier one should stay below” (i.e. on the external part of the handle).