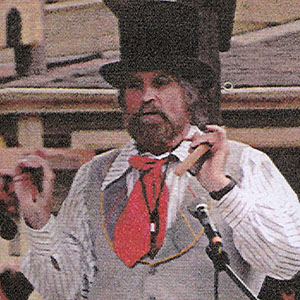 John B. Cahill, Jr. was known as “Mr. Bones.” He was born in Atlantic City, NJ, and graduated from Boys Town High School in Omaha, NE. While at Boys Town, he learned to play “rhythm bones,” a musical instrument crafted from wood or animal bones, common in minstrel shows in the 1800s. It was a rare talent that became his lifelong passion.

After many years of playing the bones as a hobby, John began his musical career in 1990 as a street performer at Underground Atlanta. Later that year, he joined Dr. Horsehair’s Old Time Minstrels, a band playing popular music from the 1800s. For seven years, he performed with the group at festivals, conventions, fairs, Civil War re-enactments, and other venues across Georgia. The band was featured at the 1996 Atlanta Summer Olympic Games (including Centennial Park), Six Flags Over Georgia, Stone Mountain Park Antebellum Festival, Atlanta High Museum, Georgia Dome, Callaway Gardens, and The Omni.

John also brought his distinctive sound to the South Metro Concert Band and the Peachtree Jazz Edition Band. In 1998, he formed Mr. Bones & Company, a four-member band that entertained at festivals, nursing homes, senior centers, churches, and other events.

Five years later, he and his wife Kay teamed up to form the bones/keyboard duo of Mr. & Mrs. Bones. They performed for a range of audiences in the Metro Atlanta area, and participated in the Summer Program for Kids at 20 Georgia libraries, telling stories and educating children about bones history.

Several of Mr. Bones’ DVDs are being documented and preserved in the Library of Congress, along with the history of minstrel shows and bones.

Letter to the Editor – 2004. Kay and John, How can I ever thank you for all your help with the bones. Music Camp is in full gear and they are all having a ball.  he older kids are learning about and how to play the bones. For bones they used yard sticks cut into 6 inch pieces. Ev Cowett is teaching the older kids at camp to play them. Our grandson, Joey (12 yrs) has learned to play them pretty well. He can do both hands and has learned how to make them snap and roll. Ev Cowett is  called Dr. E. at camp. Besides the bones, they are learning about the psaltery, the tumbrel, the shofar and the pipe–all ancient instruments. Every year they  ave a different format for the camp and teach different instruments. Marty Mitchell  (Marty is Kay‘s cousin and attended the Saturday night of Bones Fest VI in Greensboro. He asked us to help with Music Camp.