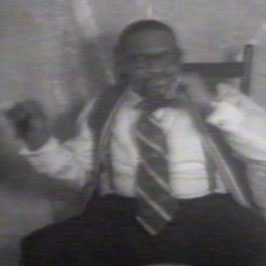 As is sadly the case with much blues, recognition of the art of JC Burris has been extremely long in coming. He lived and played in the Bay Area for nearly twenty years, yet he remained a stranger to many local audiences. Thus, it did not seem particularly strange that Burris opened a radio concert by singing his composition, ‘I’m a Stranger Here, Just Mowed Into Town.”

Born in 1928 near Shelby, North Carolina, some JC Burris’ earliest memories were of music as played by his uncle, the venerable bluesman Sonny Terry. Terry was frequently accompanied by Blind Boy Fuller or Big Bill Broonzy, both seasonal visitors to the Burris farm, and Terry remains the most important Influence on Burris’ music.

Music was an integral part of the rural community of North Carolina. During harvest time, families from neighboring farms gathered to aid in corn shucking. Burris’ father would motivate the helping hands by hiding jugs of white lightning’ beneath the piles of corn. As JC puts it, the white lightnin’ seemed to stimulate the corn shucking so that the party could begin.” There was no pay to shuck the corn.” he recalled. “The lady folk would cook barbecue, and everyone’d have whiskey to drink. They’d bring out their guitars and the tub with a string and they’d play. I was a little boy and I’d stay out and watch ‘ em.

Burris was the nephew of old time bluesman Sonny Terry, and together with Brownie McGee played and recorded together. This song is a solo performance by Burris from a video recording made by Ed Michaels, and is used with permission. In this recording Burris sings and plays rhythm bones and harmonica, and there is a great bones solo at 2:50 into the song. He calls his bones his ‘African Rhythm Bones’ but they are Joe Birl’s black plastic rhythm bones.   The video also has Burris singing with harmonica, hand jive and dancing limberjack doll. If you are interested in the entire video, you can contact Michaels at drumsong@earthlink.net