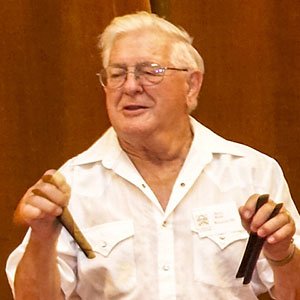 From Littleton’s Senior Center to the Smithsonian, Shorty sure could play.

Whitefield, New Hampshire—Elwin Boulet‘s bright blue eyes light up his face when he talked about bones –rhythm bones that is. He played the ancient musical instruments for 72 of his 82 years including in Washington, D.C., at the 1999 Smithsonian Folklife Festival. “All I need is the time of the music; I never miss a beat.”

He played the curved, seven-inch-long pieces of wood like a percussion instrument. Clamping the bones firmly between two fingers on each hand, he created a clacking, drum-like beat by quickly moving his arms and wrists –not the fingers –he was quick to explain. It‘s a link to a past as far back as recorded civilization.

Rhythm bones have been excavated from prehistoric Mesopotamian graves (3000 B.C.) and found in Egyptian tombs, according to information on the rhythmbones.com website. In Europe today, they‘re most widely heard with Irish, English and Scottish folk music.

Early English and Irish settlers introduced bones playing in the New World. Then, as today, they were used as accompaniment to jigs and reels to keep the beat steady by duplicating the rhythm of the music.