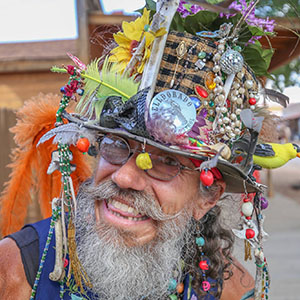 I have told parts of this story several times at Bones Fests. I was walking down the street in Tombstone and heard the clatter of rhythm bones across the street. There was Johnny Bones the first rhythm bones player I had heard since my grandfather died in 1967. He told me about the Rhythm Bones Society and on-line lessons and off I went. Little did I know that chance meeting would change my life. After practicing all summer back in NY, I returned to Arizona and started playing the rhythm bones with the minstrels. In doing so I learned a lot about busking and a very unusual individual.

Starting life in Toledo, Ohio he worked various occupations: roofi ng, restaurants, a minstrel show performer on banjo and actually played hard rock guitar for a while. He confesses to being a stunt junky and loved performing in gunfight shows near Phoenix, AZ. Diving out of windows, falling off roofs, being thrown over hitching rails were part of the fun. However, that is a young man’s game and will take a toll on the body after a while.

His first exposure to rhythm bones was a Percy Danforth video. He said he watched it long enough to see how to hold them and get a few clicks then turned off the video because he wanted to develop his own style, which is not unusual as you who have attended a few Bones Fests can attest. Most of us have our own style of play. He continues to wish for a set of Danforth bones. The ones he uses in Tombstone are hand made by him from buffalo ribs.