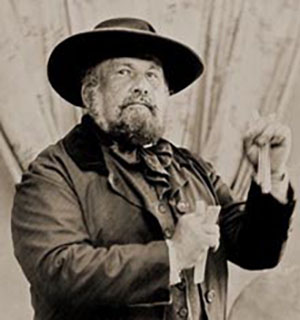 My long time musical interest has been in the traditional music of the 17th-19th centuries, with emphasis on the development of American music from 1830-1865.  Bones playing grew out of necessity and soon became a labor of love.  As a Civil War reenactor, I’m one of the founding members of the Second South Carolina String Band (1988) and have had the good fortune to sit in with other groups, including the Virginia (Ethiopian) Serenaders and Homefront, to mention a few.  We have a number of recordings available, including our recently released CD, “Strike the Tent”, and have done work for motion pictures, PBS specials, including Ken Burns documentaries, and numerous regional preservation pieces.  Our Band contact is civilwarband.com.

We realized that Period-style percussion was needed to compliment our sound, so bones, tambourine, jawbone (and triangle) became my instruments of choice.  I lovingly refer to this as playing “dead animal parts”.  Self-taught, with the help of the early “How to Play the Bones” tape and booklet by Percy Danforth (sound familiar???), I’ve had the privilege of spreading the word about playing the bones for the past 25 years, often times providing instruction to others while we break between sets at our performances.  I do purchase bones and have also been blessed, over the years, by having a number of my “bone-ified” friends send me packages of ribs and jawbones for my use.

Preserving history has been both a career, as well as an avocation, and I hope that we can, together, pass this playing tradition on to future generations!