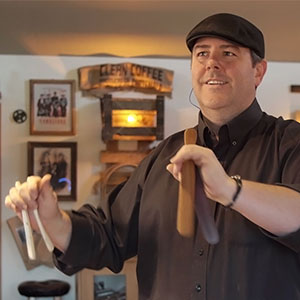 The Sound of Music Video

I’ve no exciting story to tell here, nor do I come from a legacy of great players. That said, I’ve loved Irish music since I was young. I went to see my first of many concerts with The Chieftains, back when they were all with us. That was the first time I took notice of the bones. Martin Fay and Seán Keane had been fiddling throughout the night, when Martin lowered his fiddle, raised his hand, and started rattlin’ the bones. I was too far away from the stage to see what exactly he was doing, but I never forgot that sound. I’m so glad I took my children to see them before Paddy Moloney passed away.

Gaelic Storm was the first Celtic band I followed from their beginnings. During the autograph session, my son, Sean got to sit on the shoulders of Pat Murphy. I was more excited than he was, as Pat thanked me for bringing my kids to experience Irish music. Pat played spoons, in addition to harmonica, accordion, and who knows what else.

[Note: Mike has produced three videos that are now on our website (see above)  The last one is his BFXXVI performance.] 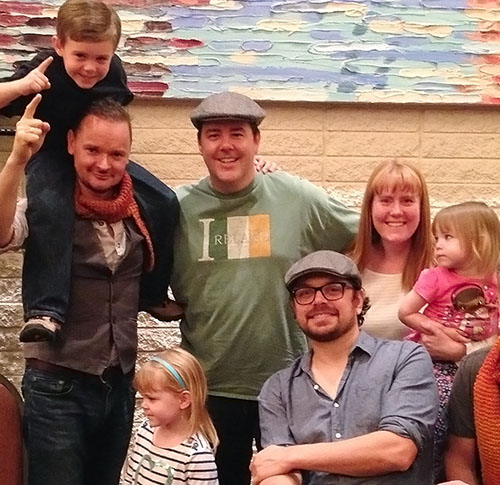 Over the years, I listened to so much Irish music that the rhythms got embedded in my mind. I really think that laid the foundation for me, though it was some 20 years later that I actually played the bones myself. Now it seems inevitable that Irish music leads to Appalachian, Bluegrass, Country Blues, although for some folks, it may lead the other way.

Some years later, I discovered that we have an Irish Cultural Center in the heart of Phoenix, AZ. That lit a fire under me, as now I was around people who loved their ancestry, music, and culture. I discovered that my family name is an Scottish/English border name, while my great, great-grandparents Joseph Baxter and Catherine Clare, both emigrated from Ireland. I started taking the family to the Irish Faire and the Highland Games. To top it off my wife is a red-head named Heather McCann. I’ve always felt the music is in my blood.

So where do the bones come in? One day I stumbled across some videos of Dom Flemons, and was absolutely amazed. It turns out that we have a mutual friend in Phoenix, though I’ve never met Don. That got me interested enough to order a set of real bones. It wasn’t until I found Brad Dutz’s tutorials, that things started to click (pun intended). His two finger grip was essential for my success. After that I was hooked. My informal education continued with an hour long conversation with Scott Miller, who shared more techniques with me, along with Barry Patton. I’ve found these folks to be very generous with their time and knowledge.

I bought several more sets and even had a woodworker friend, Dusty Travis make me some from Purpleheart and Osage Orange. He steam bent and fashioned them to my grip, so they play smooth and sound amazing. I was working in Redwood City last year, so I drive up to Lark in the Morning and tested every set of bones they carried, before buying several more sets. My wife and kids ask me, “How many sets of bones do you need?”. Well, we all know the answer to that.

I’ve found a passion for sharing the rhythm bones and Old Time Music with kids. I’ve played for my daughter’s school, using a format that gives the kids a brief musical journey from Ireland & Scotland, across Appalachia, and down to the Mississippi Delta region. This really gives them a fun introduction to different styles of music that are all linked historically. It’s the music of America to me, and it needs to be preserved. I’m honored to be part of the Rhythm Bones Society.

How old were you when you started working with wood, and who taught you?
I’ve been around woodworking my whole life. Both of my grandfathers were hobbyists, but my grandmother’s brothers were professional woodworkers, so I’ve been tinkering around their shops since I was a child. I didn’t collect my own tools or build my projects until I graduated
college, so I was in my twenties before I tried to make something on my own. My great uncle Kenny and his son Alan taught me quite a bit, along with a clockmaker named Greg Ryznar, who showed me an array of useful techniques. YouTube, books, and magazines have helped, as well. My favorite part of woodworking is seeing something, then going out to my shop and figuring out how to make it with what I have. It would be easier to buy plans or go to a class, but I really do enjoy challenging myself.

What types of things do you build?
My favorite thing to build is furniture, specifically in a Mid-Century Modern, or Danish Modern style. The majority of what comes out of my shop however, caters to the art industry. I make  custom art boards and frames for artists around town, as my wife was in this field during the
start of our marriage.

What kind of music do you like and what instrument(s) have you played?
This is such a loaded question and I could probably write an essay on it! I’ll start by saying there are good songs in every genre of music, and I would listen to anything played for me (unless it was too vulgar). I am a classically trained trombonist, and sonically I prefer 20th century
composers like Stravinsky, Holst, and Copeland. I also played some jazz and was even in a ska band in college. On the pop/vocal side, I enjoy everything from S0’s rockabilly to modern college alternative. And of course, you can’t be named Dusty, and not enjoy some Classic Country & Americana!

What was it like to create rhythm bones for the first time?
I was so excited when Mike approached me about building some bones, especially since I had no idea what they were or how to construct them! In the orchestra, there are plenty of wooden instruments, but nothing like the bones. A piece of wood is such a dynamic object, so it was important that we figured out how to best arrange the wood, so that we could get the tones that Mike wanted for his playing. I went through my wood hoard and banged on some pieces, to see what was most resonant, then I worked up a template. Once I found some candidates, I quarter-sawed and flat sawed the same species of wood, to see if the sound was any different. To get the curve Mike wanted, I steam bent one set and sawed the curves on another, to see if the sound was better either way. It was important to get the hand feel and action correct, so I ended up tapering and shortening some pieces to get them just right. In the end, the steam bending vs. sawing made a minimal difference (at least in the species we were trying), but the quarter sawn pieces were definitely more resonant.

What is your impression of the sound of Purpleheart, Osage Orange, etc. vs. other woods?
We ended up trying around eight or so different hardwoods, but it seemed like the ones that produced the best sound were the hardest. .. the Purpleheart and Osage Orange. In the words of my uncle Kenny, both are “harder than a woodpeckers’ lips”, so they took some wrangling to get right. The Purpleheart took quite a while in the steamer, and much longer than a ring-porous wood like White Oak, or Ash would. The sound was just amazing, very resonant and voluminous for two pieces of wood being knocked together. The other surprising species was bamboo. We custom fit a set for Mike, and he could get a really nice sound from those as well.

What feedback did you get?
Mike really seemed to enjoy the style and the fit that we came up with. He says they rank among the best sets he has. I still have a box full of pieces to finish for him, so I’m hoping we can really dial in what he’s looking for as a player.

Would you offer to do them for others?

How should they contact you if so? I would definitely offer them to anyone that is interested. It brings me great joy knowing that someone is enjoying, and in turn producing music that others enjoy, with something that I have made. Shoot me an email at dustytravis@gmail.com.

Is there anything else that’s cool or interesting?
There’s an old Shaker song that says that “it’s a gift to be simple, it’s a gift to be free”, and it truly does not get simpler or freer than banging two sticks of wood (or bone) together to make music. That is what you all are doing in the purest essence. The rhythms and sounds that you all make with your bones are such a perfect compliment to the old time songs that you’re playing. I’m so happy that Mike introduced me to this society. Cheers!