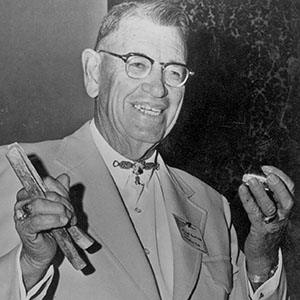 Storyteller Bud Bartram is one of the few cowboy bones players in our database. At age 98, he was still occasionally entertaining at his assisted care facility. His son, Gary, recently told me how he made bones to accompany himself on his jaw harp.

He played cow ribs and did not like the sound of wood bones. Being a working cowboy, he would occasionally come upon a sun dried carcass. The only usable bones came from the upper back part of the rib cage next to the shoulder where the bones were thin. He would select only about two bones from a carcass. He would cut 14 inches of bone with a saw in the field and later trim them to the proper length (about 7 inches). He would then break the bottom of a coke bottle and use that to scrap the bones until he got the sound or pitch he wanted. This could take hours and hours. He still plays a set that he made 60 years ago.

Bud Bartram was  98 when he died in 2004. He was a member of the Cattlemen’s Association, the NRA, and was a deputy sheriff and justice of the peace. He was a cowboy poet and entertainer and also played harmonica. RBS has a recording of him talking and playing harmonica and bones.