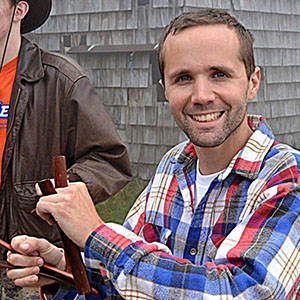 It was 20?? years ago this year that I learned to play rhythm bones. I learned from Ernie Duffy, a close family friend. He had learned to play from Shorty Boulet a few years before. I had the advantage of a teacher in Ernie. Ernie had to learn from Shorty via pure observation and will power. Once I got the hang of it Ernie would take me to square dances and let me play along with him and Shorty. That was the key to continued effort – playing in public. (see on-line newsletter, Vol 18, No 1 for more details)

Ernie brought me to my first Bones Fest (and many more), his second I believe. Part of the fun was that Ernie hadn’t learned to play very long before I did, meaning that we got to learn a lot of things together or at nearly the same time. This allowed us to develop a similar style of playing that allows us to sound, what I believe to be, greater than the sum of our individual playing. Check us out at http://www.youtube.com/watch?v=Jp4sVvDfdUQ.  I prefer to play along to old time novelty music.

I’ve had twists and turns, stylistically speaking, with rhythm bones. I’ve tried to imitate as many players as I could over time. But I always come back to the fact that the high quality triplet is the magic of rhythm bones. That’s about where Ernie was at when I first saw him play, high quality triplets. It’s funny to think how hard we worked on triplets and stopping and starting, things that seem so natural now.

I’ve been influenced and awed by too many people over the years at Bones Fests to even think about listing anyone, but what a list it would be. The talent of the rhythm bones community never ceases to amaze me. Sky Bartlett

Sky had a primetime appearance on the ABC television show Wipeout described in Volume 14, No 1 that is online on our website.

I appeared on the TV show Wipeout-ABC on Thursday night January 12th,2012. I  played rhythm bones on the show.

Sky and Jessye met at Bones Fest X in Alexandria. They were married in 2015, and they hosted Bones Fest XII.

Down Yonder with Ernie

At Bones Fest in NH

Sky and Ernie in NH