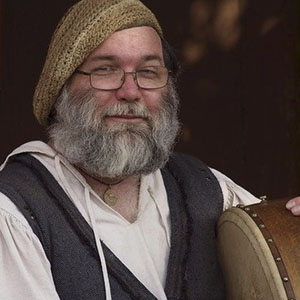 I first learned to play both bones and bodhrán at the Southern California Renaissance Pleasure Faire in 1983 and have been playing on the stages and streets of the Faire, in Irish pubs, private jam sessions, contra dances and occasional recording gigs ever since.

I’ve attended rhythm bones workshops at numerous folk music festivals (including one taught by Percy Danforth in around ‘85 or ‘86) and then taught bones, bodhrán or spoons at many more.

My first Bones Fest was Bones Fest IV in Chattanooga and I have attended many more since then.

While I particularly enjoy playing with Irish dance tunes, I have also played with classical, mariachi, heavy metal, old-time and hip-hop groups.
If the music has a beat, I can almost certainly find it!