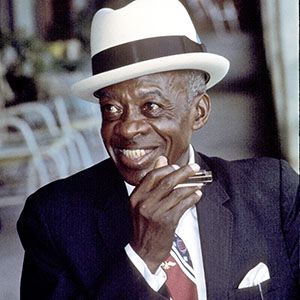 DeFord Bailey, born December 14, 1899 and died July 2, 1982, was an American country music and blues star from the 1920s until 1941. He was the first performer to be introduced on Nashville radio station WSM’s Grand Ole Opry, the first African-American performer to appear on the show, and the first performer to have his music recorded in Nashville. Bailey played guitar, bones, and banjo in his career, but is best known for playing the harmonica, often being referred to as a “harmonica wizard.” [Abstracted from Wikipedia.]

David Morton was a friend, wrote a biography about DeFord, and gave us permission to reprint his rhythm bones story.

“DeFord also experimented with various means of accompanied his music…he clacked sticks or bones together with one hand while holding the harp with the other.” [From page 99]

“Another venerable instrument was the bones. ‘We’d take the two low ribs of a steak, beef ribs. We’d cut ’em so long and dry ’em out in the sun or in the oven, and sandpaper them till they got nice and smooth. Then we’d go out and see who could beat them the best: You can make a pretty good sound clappin ’em between your fingers.’

“Years later, when DeFord was a star on the Grand Old Opry, he would run across some polished commercial bones in Chattanooga – one pair made out of ivory, one of ebony – and for a time used them in his Opry act.” [From Page 21]