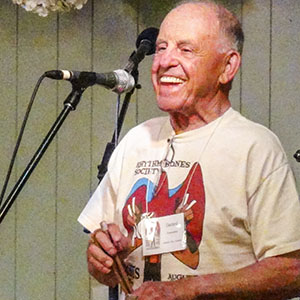 Gerard is from the Quebec City area of Canada.  We met him at Bones Fest V, and he was hesitant to perform until he saw others perform and realized that he was a good player.  He is a warm and friendly man who gives a sensitive interpretation his backup music. To understand this, view his performance on Canadian TV.  What follows is in his own words.

I was selected for the Give Way to Seniors show because of an announcement on TV asking for people 50 years old and over with a certain talent to phone up without hesitation. A few weeks later a woman phoned me and asked me, “What do you do?” I said, “I play bones.” “What is that.?” she said. I explained to her what it was. She said, “Mr. Arseneault, I’ll be very happy to meet you with your woods.”

A few weeks later, I was called for the interview. I am sitting in front of the woman who phoned me and beside her is the music master. After introductions, I put on the table my 4 woods. They couldn’t resist to touch them. In a minute or two they put my music CD on, and I started to play. You should have seen their eyes, all wide open, followed with a large sigh of wonder.

As soon as the music and I stopped at the same time and almost together, they said officially, “We want you. We like what we’ve seen and heard. We are not the only ones who make the selection, but we are among those on the board. You’ll hear from us in a few weeks.” He gave me a Charleston CD. “Good luck.”

On my way home I was saying to myself, “This is going to be my objective for this year.”    Gerard Arseneault

Two weeks before Gerard’s interview, he tore a ligament in his left shoulder, and had to have physical therapy. At his interview, he had to tell the committee about his shoulder and offered to give his place on the program to another person. The committee discussed Gerard’s dilemma, told him to continue exercising until the show because “you belong in the group.”