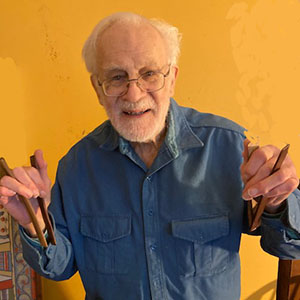 This is a short piece about how I got started bones playing.

My father was from Barbados and came to this country in 1926 where he met my mother in Cambridge, Massachusetts. My mother was from Newfoundland; it’s why I partially attribute my 82 years to hybrid vigor. Bones playing on Barbados was common when my father was growing up and where the kids, he said, would “pick up any two sticks and rattle them.”

On walks with my father we’d skip stones on the river; he’d pick up a length of rope or string and show me how to tie knots or make one of those chains that when you had used up the length you’d pull the ends and see the whole thing unravel. He’d pick up a twig and by trips end I’d have a whistle. He’d also find two sticks and sometimes just flat stones and rattle them. I never paid much attention to those rattling sticks until years later at the New England Folk Festival (NEFFA) that strolling the corridor I saw this bent over white haired guy rattling some sticks…a pair in each hand. It was Mr. Bones himself, Percy Danforth.