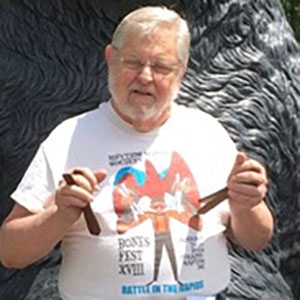 I got interested in playing bones after hearing Carolina Chocolate Drops recordings. I have played guitar, banjo, dulcimer, auto harp in a local amateur folk group, “Strings and Things” (now disbanded). I was asked to demonstrate bones playing on a Grand Circle cruise ship show. I take my bones with me everywhere we visit to try to get others interested.

I took Celtic Kilroy’s advice from his Busking Workshop at Bones Fest XVIII, and took my “bones” with me to France.

I was able to play with an accordionist in front of the Cathedral in Lyon and with a group of entertainers reenacting a Medieval Play in Carcassone.

One of the players was quite interested and wanted to know all about playing rhythm bones. I showed her how to grip them and she was tapping out double taps in just a few tries.

I told her about the Rhythm Bones Society and she said that she might Google the site. Thought you might be interested in this picture below. Stan Von Hagen